Equitation Theory and History » The Spur: Not Just for Idiots Anymore

I Wanna Be a Cowboy, Baby: ?Introducing the Spur

Growing up in Texas and New Mexico during the 70’s and 80’s amidst horsey culture, it was common knowledge that?refined?riders on?refined?horses did not “need” spurs, which were really more for the “cowboys” (a derogatory term among English-ey riders, prior to the “Natural Horsemanship” phenomenon), who, presumably, knew more about cows than horses, and shamefully?viewed both as “livestock”.

“Cowboys” wore spurs for the same reason they used harsh curb bits, or so went the conception: ?because their grade-looking, head-hanging horses sucked, and they probably didn’t know any better.

“Vaquero” was a vocabulary word in our obligatory Texas History class in middle school. ?And this word was, apparently, the Mexican word for “cowboy”, because, obviously,?Mexicans would’ve never come up with something as kick ass?as cowboy. ?Most of the Mexican’s we knew by the 7th grade were not cowboys. ?Or vaqueros.

Now, on the one hand, this prejudice was broadly justified (regarding “cowboys”, not Mexicans, nor Iberian?horsemanship, as it turned out): ?I knew a lot of folks?who had hats, horses, and spurs, and the vast majority?of them made an unsightly mess of the combination. ?Add a cap gun?and a?freak saddle, and you had a “cowboy”.

Many of them – most of them – were, to be gentle, unrefined when it came to horse-handling, training, and most things in general. ?Indeed, most seemed to consider?horses, more or less, as a cow one could ride. ?On the other hand, such a prejudice may be aptly applied to certain members of virtually every?tribe?comprising horsey culture, whether Hunt Seat, Saddle Seat, or “Dressage” (which was really just palpably forming in the US at the time).

I’m opening my discussion on the Lesson of the Spur with this?personal backdrop?because occasionally I ride or train among strangers who don’t know me from shinola, and I see them look at me the same way I looked at the “cowboys”: as a horse molester. ?Granted, I occasionally don?especially blangy?spurs, with noisy dangle-bobs, just to see the?soccer-mom-cum-Dressage-Queen set?wince, and, of course, that’s on me.

But the fact is, unless you’re so transcendent and pure that you’ve achieved what there is to achieve in haute ecole, and have sworn off?red meat, steel, leather, and stalls altogether in a well intended, but – I promise – inevitably?fruitless attempt to save our doomed universe (e.g.,: Alexander Nevzorov), then you are only advertising your?woefully underdeveloped (mis)understanding of high equitation in avoiding them.

Allow me to educate you on the cheap for the mere price of insulting you at the same time -?which, where I’m from, is the going rate for anything?gratis, especially a?sit-down meal. ?Unless there’s company.

For high school training and riding, spurs are an essential instrument, which, like?the curb bit, are actually used for the benefits of fidelity – and not, as you may have imagined, torture and/or?boot decoration?.??Virtually every respectable professor (read: 1. Dead; 2. Wrote something down prior to the advent of the internet) of high equitation has said more or less the same thing on this topic – both in terms of the necessity of spurs,?and the obvious importance of avoiding their misuse. ?Lets cover the basics.

Spurs are akin to eating utensils?in the context of high equitation. ?Riding without them is like eating with your hands. ?Of course you could, but why would you? ?And?the sad fact that three-year-olds and violent offenders will brandish them when provoked?does not?prevent polite society from using these same instruments to a higher and more respectable purpose. ?Because silverware doesn’t kill people, people. ?People kill people – albeit, most often, their very own selves and not some other.

[How am I doing? ?So far, I’ve offended cowboys, three-year olds, criminals, soccer moms, Mexicans, anyone who shows horses, and most gun owners. ?It’s the soccer moms that will keep me sleeping with one eye open, naturally; and?not just because they’re?so easily stirred to violent retribution, but because, as a single dad of two, they were the only bipedal?friends I had left, and a good carpool is hard to find. I digress.]

As with curb bits, silverware, and handguns, we don’t arbitrarily arm neophytes?with them. ?We very especially don’t add spurs to the already?moronic coupling?of uneducated riders and uneducated horses.

Horses must be carefully?acclimated to the touch of the spur. ?This process, like brain surgery (from what I understand of it), doesn’t necessarily take a lot of time, but it does need to be executed by someone with a little experience in the art,?the object being?a polite introduction, not a confrontation. ?This introduction has nothing to do with ‘gaining respect’ or some such. ?It has to do with frog boiling. Google it. 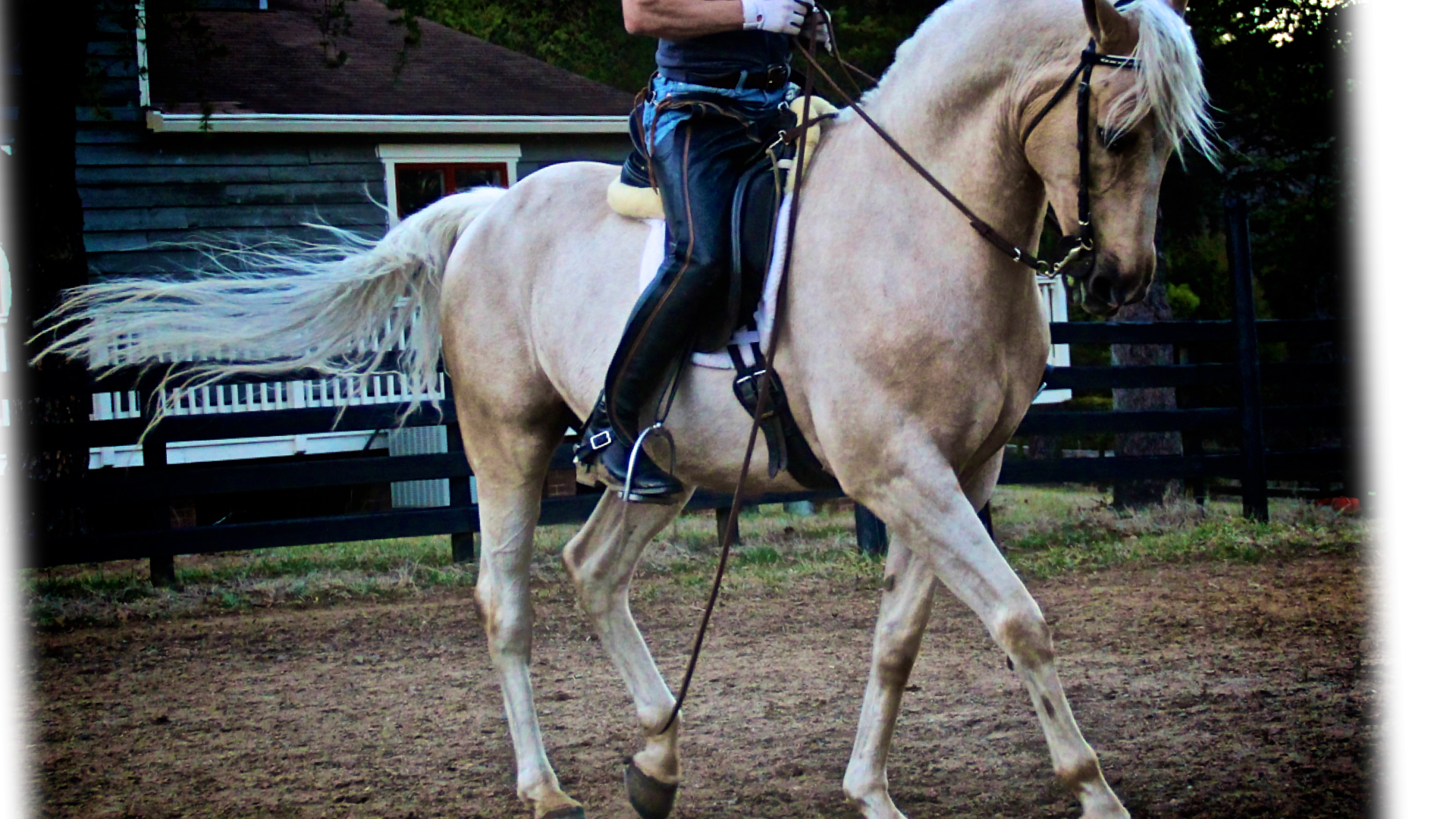 To avoid starting this sentence?with a number I’d prefer not to spell, I’ll say 99.9% of the time, spurs are simply used to clarify or underscore?the signal of the leg or heel, to the extent they actually touch the horse at all. ?This is to say, they are used, by and large, as a psychological?iterative -?not as a corporal corrective. ?Their touch comes as the result of a delicate motion of the ankle from its normal riding position. ?As I have emphasized elsewhere, and will continue to repeat whenever I discuss the spur, never should?the rider’s leg come away from the side of the horse in order to gain force. ?Needless to say, that would be uncivilized.

The Baucherist application of the spur (and of the leg, and of the heel – all of which become synonymous at a certain point) is particular and peculiar, and takes full advantage of the same kind of reflexive freezing response achieved by the use of a twitch on the nose, or securely holding an ear in order to subdue an otherwise unmanageable horse. ?Given the location of the horse’s sternum, a forceful application of the spur will quite literally “knock the wind” from them, just as it does when you are poked?near your sternum — and this is its actual effect, much more so than the painful “pricking” sensation you might imagine. ?They can easily become desensitized to the latter sensation (much as they can your consistent, thoughtless pulling?on the reins), but not so much the former. ?And having ever experienced the ‘poke’, they are very happy to avoid getting any where near the sensation again. ?Thus the effectiveness of Baucher’s effet d’ensemble?or “combined effect”, where a horse previously educated to the hand and heel (read: spur) may be immediately immobilized between both aids in the event of revolt?- no matter how beastie or restive. ?This recourse handily replaces the “one rein stop” – along with all the problems that go with the one rein stop.? In fact, it is?so?effective, I refer to it as The Hand of God. ?Not to take liberties with the word ‘hand’, or ‘God’, as we are discussing legs, but, in all seriousness, the effect is akin to a giant hand reaching down from the heavens, physically immobilizing the horse where he stands.

But Doesn’t Baucherism Prescribe “Never the Hand and Leg at Once”?

The combined effect?(simultanous application of the hand and heel) might, at first blush, appear to break one of the first principles?of Baucherism, namely,?never apply the hand and the heel?simultaneously, know as “Hand without legs, legs without hand“. ?And, technically, it does compromise the principle – but only from our perspective, not from the horse’s. ?How is this?

The essence of the principle is to avoid the horse ever becoming confused by thinking we’re ordering him to?”stop” and “go” at the same time. ?The combined effect does not actually break the rule in the horse’s mind, because what it actually communicates is: “stop and stop” (at the same time). ?And its effectiveness is nothing to do with pain from the bit and/or pain from the spurs, nor pain from both simultaneously. ?It’s that he is completely contained and enclosed within the aids, and has no “move” to make. ?The hand prevents any escape of the aids through forward motion and ducking below the bit. ?At this point, he’s convinced of this ‘fact’?through prior jaw flexions and the’ lesson of the hand’. ?The legs prevent any means of escape backward or laterally?- which he knows (separately) via the lesson of the heel*. ?It is mentally quite claustrophobic for him, but not physically abusive. ?He simply cannot compute any answer other than to hold still (because there is no other answer), at which point his anxiety is immediately relieved by our release of the hand and the heel for as long as he complies, reinforcing the very behavior we want each?time we resort to such means. ?Getting straight and still makes his world a great place to be every time – moreover, he is reflexively?inclined to bring his hind legs further beneath him.

The horse’s subsequent awareness of our potential recourse to the combined effect speedily obviates?the?need for it as an ad hoc corrective or emergency brake. ?He will begin rapidly preparing to immobilize himself upon sensing the approach of both aids simultaneously, anticipating our intent well before we have to make good on the threat.

Respect for the heel is installed immediately, as will be evidenced by his telepathic response to the most subtle pressure of the calf when asked to mobilize, collect, or halt (concepts I will expand upon in more detail when we address Baucherist communications). ?For now, suffice it to say, once you have obtained a secure seat – such that you may position your legs independently without, in any event, using them to balance?or grip, you’ll need to become acclimated to riding with spurs to advance your riding?capability. ?Wear them with dignity and some swagger once you’ve earned them by learning to use them with finesse, and as the instruments they are intended to be. ?Only microbes will mistake you for the wrong sort of “cowboy”. ?I will declare you a burgeoning ecuyer, and we shall leave?the underclassmen to themselves.