As an essential means of transportation, power, and our first mobile weapons platform, the horse’s relationship and contribution to human civilization?is inarguably singular among all others in the animal kingdom.

Political correctness has its place – namely, in politics (whether state or corporate) and marketing (state or corporate?), where we have a tendency to say almost anything other than the truth, helped?by the use of?words with obscure meanings, or at least a highly subjective ones.

It is good?to think of your horse as your partner, and I appreciate the sentiment on behalf of the horse. ?But your relationship with your horse will never quite be this. ?In a partnership, individuals work together towards common goals, sharing the work and the rewards in an equitable fashion (at least ideally). ?In general, your horse’s main goal is akin to most people’s – to do a lot less – preferably, nothing but eat, drink, poop, sleep, have sex (if they are able), and play – not necessarily in that order. ?Horses are simply more transparent, which makes training them much easier.

Whether you like it or not, your relationship with your horse is a tiny dictatorship. ?We?have an allergic reaction to the word, but human civilization has thrived on it?for the bulk of our history – and, of course, it is the governance model we use to raise our children, train armies, and run corporations (more or less) – even in a (kind of) “democracy” like the Inited States.

You don’t really have a choice about taking on the role of dictator here, to be blunt. ?But you do have the choice about the kind of dictator you are. ?You can be?a benevolent dictator – an authoritative ruler who looks out for the best interests of your people, treating them with dignity, respect, and fairness; ?or you can be a thoughtless jackass – an authoritarian ruler, allowing for zero tolerance, interpreting confusion as a challenge to your authority, quelling uprisings with extreme prejudice, and so on. ?You know the type.

In spite of its popularity and ease, the second approach never works well for long among non-indentured people, nor horses – who are oblivious to the fact that you think you “own” them, and actually can, by law, have them put out their misery for looking at you wrong. ?Depending upon the circumstances, people and horses?may be fooled, intimidated, and even accept?extreme abuse, but only for a little while. ?In the end, the populace always outnumbers its governors by a vast margin. ?The dictator’s only hope of long term survival is benevolence. 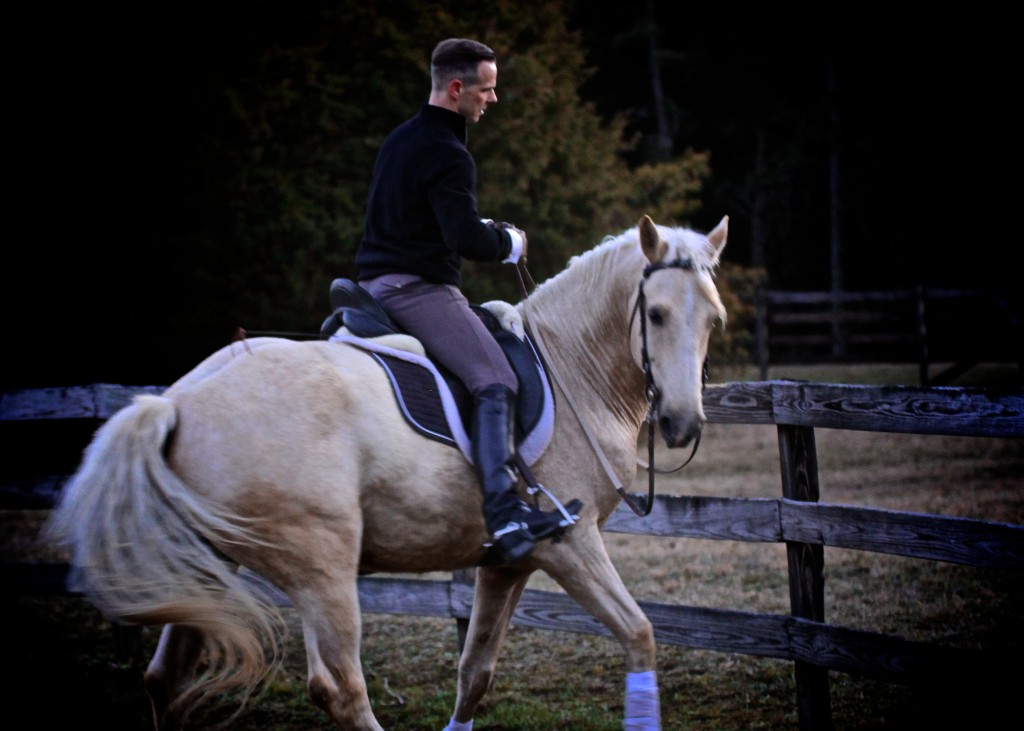 You must, therefore, assume the role of benevolent dictator with your horse. ?If you refuse to dictate, you are refusing to lead, and he will overthrow you, and govern himself – everything in him tells him he must act this way to?preserve himself in the absence of leadership (is it any different with humans?). ?It’s not personal. ?You may certainly love him – in fact, if we are to believe Nuno Oliveira, you will never truly taste the delicacies of high school horsemanship if you don’t, on some level, fall in love with him. ?You may certainly treat him with kindness, and respect him as a fellow living being. ?But for his benefit; for your safety and his, you must govern him absolutely, requiring his obedience to reasonable demands, and avoid ever letting him doubt who rules the relationship that exists between you. ?He does not have a vote, and, ultimately, he?doesn’t really want one.

The social structure of horses – and of most animals, including humans (though we are loathe to admit it) is quite simple. ?Between any two horses, only one calls the shots, and it’s the one who insists on doing so,?and who will not hesitate to appeal to force as needed. By and large, horses are themselves benevolent dictators – they treat one another with a kind of fairness and respect. ?They certainly don’t hurt one another for pleasure. ?Before resorting to violence, they indicate their frustration and offer warnings through familiar gestures – nodding, ear expressions, tail switching, and leg cocking. ?That’s fair.

If the warning proves insufficient, horses quickly appeal to force -??escalating matters with a kick or a bite. ?In this way, they train one another (very essential training, in fact, as we find in horse poorly socialized among others during their formative years); and in this same way, we are most successful in training them. ?We offer warnings and give them time to react when they resist. ?If they continue to resist, we must quickly “appeal to force”. ?Appealing to force doesn’t mean appealing to abuse and torture – nor, by and large, any corporal effect greater than would be applied to a child in civilized society. ?It means the invocation of just enough psychological and/or physical pressure to achieve a?complete surrender, on the assurance that all aggravation and unpleasantness on our part will subside immediately?the very instant they submit – and with no hard feelings.

Problems arise when we mistake resistances arising from communication failures?(we have failed to clearly indicate what we want, or the horse is still trying to understand what we want) for moral resistances, and mistakenly escalate to some form of punishment in pursuit of compliance -?whether it’s an unjustified jerk of the halter or pinch of the spur. ?In the best case, these incidents open the door to confusion and indifference on the part of the horse (he’s no longer listening closely and following you; he’s no longer participating in learning); in the case of inexperienced riders and inexperienced horses, it often leads to violent?revolution. In either event, obviously we have created our own problem by taking our?privileged position of power for granted.

Once this principle is understood and accepted, the path to high school horsemanship requires we spend some time understanding what’s reasonable to require from the horse at different stages?of mental, physical, and educational development; learn how to convey what we want in a way the horse can easily understand;?expand our ability to effectively diagnose the resistances we experience in the course of?training; and, with experience,?refining our means of resolving these resistances in a manner befitting their moral, physiological, or communications-oriented origin.