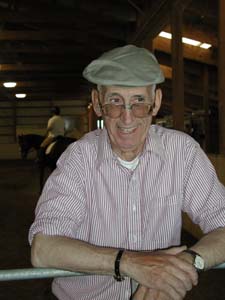 I am so regretful that I discovered Racinet through his writing only after his untimely death while giving a clinic in Germany (yes, the irony is inescapable). ?His interpretations, synthesis, and addendums have been invaluable to me.

As it turned out, Mr. Racinet had lived just a few miles south of me in?South Carolina, USA, for many years.

I came to explore Baucherism more deeply while researching the methods of Nuno Oliveira. Pursuing then other current proponents of Baucher’s techniques, I came across Racinet and am very glad I did.

I think it is fair to say his is among the most accessible explanations of Baucherist principles and techniques. As I think anyone who has spent many years in the discipline understands, there are many capable?equestrians, and yet few wonderful teachers of equitation.

Why is this? ?At a certain point beyond intermediate-level riding, it becomes quite difficult to accurately convey?the sensations and communications occurring?between horse and rider. ?And as soon as?we begin to put down the “rules” of a given methodology, we begin to find important exceptions; and then the rules become complex algorithms (“if A, then B, unless C and D, in which case Z, unless…”?). ?We need someone to draw them from the ether for us. ?We need a Stephen Hawking to take a topic as complex as quantum physics and?free it from the malaise of?complex equivalency.

For most, it is not enough to simply read Baucher (which of course I highly recommend) – particularly if you are reading a translation from the original French. ?How much insight is lost to?context via the subtle but glacial movement of?language and context over time?

But then here is Racinet. He is French, though he moved to the US and resided here until the end of his life. ?So he has a certain appreciation for the subtle insinuations here and there within Baucher’s work, and a better point of departure for understanding the culture of the day when Baucher was creating his work.

He also understands well enough American culture -?enough to move the right meaning from there to here. ?Moreover, he is never condescending, taking instead the tone of a fellow student and admirer of our ancient friend, the horse.

From his very readable and often entertaining pros, I was able to head myself off from many mistakes – mistakes that would by now seem obviously such, but, in retrospect, I know I would have committed had I not invested much time with Racinet’s work.

If you are passionate about understanding a higher order of “classical” dressage technique, I would encourage you to begin with Racinet … but be forewarned: he will change your thinking.